I listened to ‘The Life Scientific’ on Radio 4 recently which was a fascinating interview with David Spiegelhalter, a Statistician.

He was talking about chance and probability.  He uses a measure (developed by Ronald A Howard) of the chance of an accidental death which is called a ‘micro mort’  this lists the number of times you have to carry out a particular activity to have a one in a million chance of dying while doing it.

For example – if you drive 300 miles you have a one in a million chance of dying in an accident.  The good news is that it ‘resets’ each day.

But it’s not all bad news.  He was very interested in coincidence and related some amazing stories such as:

The man who was only holiday in Portugal and found a coathanger that had belonged to his brother in the army forty years previously.

Another man who was walking down the street and answered a callbox phone that was ringing only to find that the call was for him.

Someone bought a painting in Zurich took it home and unpacked the back which had been packed up in newspaper to find that there was a photo in the newspaper of her when she was a child.

What is the probability of one of these happening?  It depends on the opportunity for it to happen.  You will not answer the phone if you are not walking down the street when it rings, for example.

David Spiegelhalter started to realise that people with certain types of personality attract more of these coincidences than others.

These are the type of people who constantly talk to others.

This made me think.  If you want to ‘coincidentally’ find a person, or organisation who want to buy what you are selling, this is not going to happen while you sit in your office and think.  Get out there (physically or virtually) and talk to people.  Tell people what you do, what’s exciting you at the moment and what you’re working on next.  You never know who might be listening, or who might tell you something you can use later.

If you don’t talk to people – you could sit next to your long lost brother for the whole of a train journey and never know it was him.

I was recently at a meeting, waiting for the attendees and talking to one of the Directors (who wasn’t going to be in the meeting) about ‘stuff’ nothing focused, or even strongly related to our discussions, but interesting nonetheless.

The following day I was at meeting with a potential client; nothing I was offering was what the client needed then something they said reminded me of the conversation I’d had the previous day.  I introduced the topic we were discussing and, after a discussion the client booked 8 days of workshops with us. I’m certain this wouldn’t have happened unless, coincidently, I’d been talking to someone the previous day about something I could use in the meeting.

This happens all the time – so get out there and talk to people, listen to the radio, watch TV and interact with as many people as you can.  You never know what coincidence is lurking around the corner. 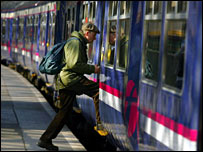