What do Charles Darwin, Thomas Malthus, Dinosaurs and Kodak have to do with change?

I don’t think anyone would disagree that we are going through a period of rapid and constant change. Indeed as someone said to me recently “the only constant in business today is change”.

We have been thinking about change for some time and have taken ideas from Darwin, Malthus and many others to help us develop our extremely effective change process.  We have worked with many organisations across the UK in a wide range of areas including Health, Manufacturing, Social Enterprise, Retail, Business Consultancies and IT to help them adapt to a rapidly changing environment.

This article will take you on the same journey we went through and will introduce our ideas and unique process.

These are the Pre-industrial, Industrial and Post-Industrial Ages. 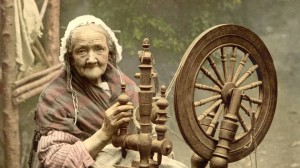 The Pre-industrial Age is characterised by small, isolated manufacturing and services operating in very local markets –real ‘cottage industries’. Few people moved outside of their immediate environment and there was little division of labour.

Education for the majority of people was sporadic or non-existent and physical and mental health was mostly a community activity. 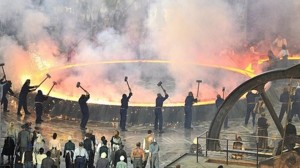 The Industrial Age is marked by a rural de-population as many people moved from the countryside to the towns where production was being centralised, economies of scale creating large Factories instead of small individual production units.

Science and technology made these huge changes possible and had an impact on education and health.

This concept of ‘Factory’ was applied in as many areas as possible and led to large hospitals and mental institutions as well as schools which were designed along ‘batch processing’ lines with standardisation and quality assessment becoming the norm.

Medicine made a move from being person centred to being technically focused, as we found drugs and techniques to improve physical and mental health, Clinicians moved to a more ‘technician’ based approach.

The Post Industrial Age is characterised as an almost ‘full circle’ change. The number of huge factories and production units in most of the Western world has decreased dramatically and there has been a resurgence of small businesses. People are becoming disenchanted with a lot of the industrial age approaches to education, health and government. A much smaller scale and individual approach to things is becoming the norm.

Technology has led these changes with the Steam Engine driving the Industrial Age and electronics and the internet driving the post industrial age.

The Reverend Thomas Malthus predicted in 1798 that increasing population levels would lead to a resource crisis for the world as agricultural production would not be able to keep up with increasing numbers of people. 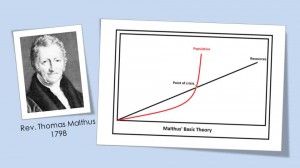 In a business environment, we talk about a ‘saturated market’ where too many companies compete for the same business and a disaster took place leading to the demise of a number of companies in the marketplace until a re-balancing took place. An example of this was the de-regulation of directory services and the huge number of 118 companies which grew out of that. How many are left?

In 1859, Charles Darwin was aware of Malthus’ work from the very early part of the Industrial Revolution and was interested in how his predictions had not come to pass. Obviously something had changed to make this happen – people had adapted to the changing environment and survived. 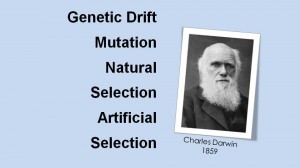 A cornerstone of Darwin’s theories of evolution was Natural Selection.

This theory looks at the interaction of species and their environment. As the environment changes, species change as individuals with certain advantageous traits survive longer to breed, and others die before they breed.

For example, the peppered moth exists in both light and dark colours in the UK, but during the industrial revolution, many of the trees on which the moths rested became blackened by soot, giving the dark-coloured moths an advantage in hiding from predators. This gave dark-coloured moths a better chance of surviving to produce dark-coloured offspring, and in just fifty years from the first dark moth being caught, nearly all of the moths in industrial Manchester were dark. The balance was reversed by the effect of the Clean Air Act 1956, and the dark moths became rare again, demonstrating the influence of natural selection on peppered moth evolution.

An example of this effect happening in the business world is the results of a change in the technological environment on Kodak, Ilford and Agfa Gaevert. 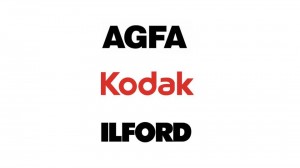 They even invented the digital camera in 1975 thus setting the scene for their own demise. 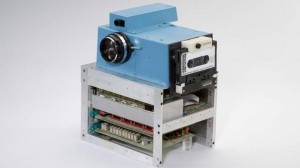 Kodak filed for chapter 11 Bankruptcy protection in 2012. They emerged from this in 2013 by selling off all their patents and becoming a largely service based business providing, among other things packaging and printing services.

Ilford and Agfa Gaevert were much smaller players in the photography market with Ilford specialising in Black and White film and paper. They had survived the environmental change from black and white to colour and were now looking at another huge change in their business environment.

Agfa Gaevert’s film business was sold in 2004 and filed for bankruptcy in 2005.

Ilford went into receivership in 2004 and was subject to a management buyout in 2005. It currently produces high quality black and white photography products and digital imaging products under the Harman Technology brand.

So the advantageous traits possessed by Ilford and Kodak have helped them to survive, albeit (especially in Kodak’s case) in a very different way than they originally operated.

The change in environment for Kodak, Ilford and Agfa Gaevert happened over a relatively long timescale which helped them to adapt.

This isn’t always possible though. Extinction Events – a rapid and widespread reduction in the amount of life on earth, happen too rapidly for species to adapt to the change in environment. Whatever the cause, an extinction event wiped out all the dinosaurs around 66million years ago.

In a business sense, we experienced an extinction event in 2007-2008 with a huge number of organisations going under including many household names like Woolworths, MFI, JJB Sports and a large number of financial institutions including Northern Rock, HBOS and Bradford and Bingley. 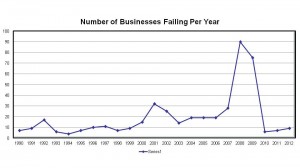 So how can we avoid extinction?

In animal terms, this is the selective breeding of animals with certain traits to create new breeds.

For example, all dogs today are descended from a few domesticated wolves in China over 15,000 years ago. 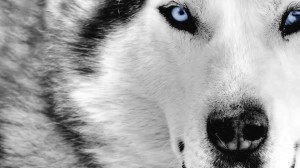 This is a mine sniffer dog we met in Peru. He can smell a mine buried up to 1m in the ground. He walks across a minefield and sits when he smells a mine. The mine will be buried between his paws. He is worth around £100,000 and has been carefully bred for specific traits to solve a problem. 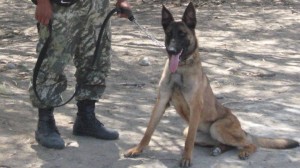 Artificial Selection And Change For Your Organisation

So would it be better to be in control of the changes you need to make in your organisation to survive the environmental change, rather than hoping you will adapt organically and survive?

We have been working on and developing an approach to organisational change that uses Darwin’s ideas of Artificial Selection. 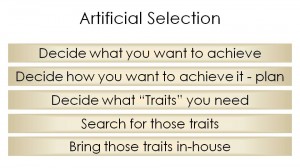 So, it’s that simple – not easy, but simple.

And here’s the route map with the stages to go through to follow the artificial selection model. 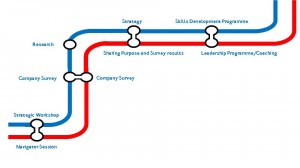 Each of these stages requires a lot of focused work and needs a parallel approach from both Process and People aspects. It is possible to miss a stop if you have already been there – if you have already carried out a company survey for example, you don’t need to repeat it, but it is important to visit all of the stops.

We have developed tools and processes to help facilitate each of the steps and we’ve introduced one of them below.

The Navigator session. Probably the most important stop, this will help you decide what you want to achieve – the first step on the journey.

Work through each level on the model by reflecting on where your organisation is now.

When you reach the ‘identity’ stage it is helpful to use a number of random photographs to define the organisation’s identity. This is because identity is an abstract concept and it is easier to use an image to describe your thoughts about identity.

Here are some of the ones we use. 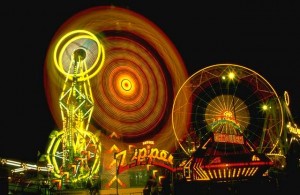 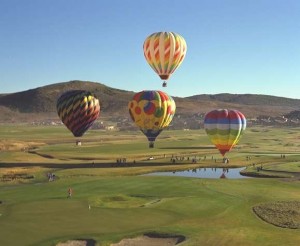 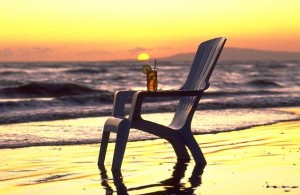 Describe your organisation’s purpose – what is it for? This isn’t the vision, or mission of the organisation, it is more than that. Going through the earlier levels will help you to define the true purpose.

This is crucial, and the process will help you to define a purpose which will be different to the one you thought you had but will be one everyone can share and will aid clarity and motivation.

Once this purpose has been defined – go down through the levels asking the question “with this purpose in mind, what identity do we need to have to achieve that purpose?” and continue this for each level.

You will think differently about your organisation at the end of this process which is the key to the success of the rest of the journey. As Chinese Philosopher Laozi said “A journey of a thousand miles starts with a single step” and this is it.

The Rest of The Journey

Obviously, each stop on the journey will take time, but it’s well worth taking the time as this will help you to create an organisation that will be able to adapt to future changes and survive in a rapidly changing environment. Contact us for more information about how we can help you on your journey 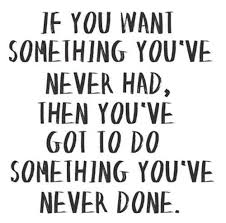